The Bizarre world of LEE CARTER

Lee Carter is an artist who spends his daytimes doing concept work for Bizarre Creations and his evenings doing illustrations for things such as Mam-Tor’s Event Horizon and Games Workshop’s Black Library. Where he finds the time? Nobody knows…

Lee Carter is an artist who spends his daytimes doing concept work for Bizarre Creations and his evenings doing illustrations for things such as Mam-Tor’s Event Horizon and Games Workshop’s Black Library. Where he finds the time? Nobody knows…

Hello Lee. Welcome to Thunder Chunky. How are things today?

Hi Thunder Chunky, things is good man. My kids are in bed and I’m about to start on some vampire and zombie illustration’s for Games Workshop. Hopefully while watching “Land of the Dead” out of the corner of my eye.

As per usual, for any of our readers who aren’t familiar with your work, could you give us a brief summary of what you do?

Well, by day I’m a lead artist for Bizarre Creation’s, doing bit’s of 3D, but mostly concept art for character’s and environments. Then when the sky turns black I produce illustrations for the printed media. Game’s Workshop’s “Black Library” have kept me busy this year, which is great as the subject matter is fantastic. Plus one of the most fun thing’ a comic strip for Mam-Tor’s “Event Horizon”. 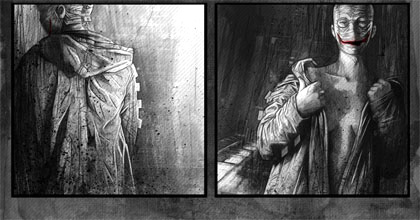 This year saw the release of Event Horizon, a stand-alone creator showcase, where your work appeared alongside some of the best-known and best-hidden artists in the industry. How did you get involved in the project and how important was it to you?

After browsing the brit comic art site I followed a link off to Liam Sharp’s website. His message board was a great place to hang out and it was great to get a reply from Liam after I posted some artwork. Then he asked if I would be interested in collaborating in an ongoing anthology I’m a big comic fan, my loft is heaving under the pressure of a 20 year collection. So I was well up for doing “Necromachia” with Liam Sharp.

Very soon, Event Horizon 2, should be hitting the shelves. What can readers look forward to?

Necromachia 2 :) “world of endless interiors” and of course the talent’s of long-time established pros – such as Simon Bisley, Liam Sharp, Alan Grant, Greg Staples , Ashley Wood, Glenn Fabry – and Steve Niles and other great artist’s like Kev Crossley, Dave Kendall and Ben Oliver. And a lot more writer’s artist doing something they love, I think it’s over 200 pages now.

Now this is all just work you do in your spare time. Your day job is at Bizarre Creations. How are your illustration skills put to use at a computer game development company?

Bizarre Creations were great and they took me on with no computer training. So I started there fresh not even sure where I would fit in. It was a small company at the time so I had the chance to try most things 2D and 3D But concepting stuff was the most interesting for me and It’s a great benefit to have had 8 years of traditional art training. 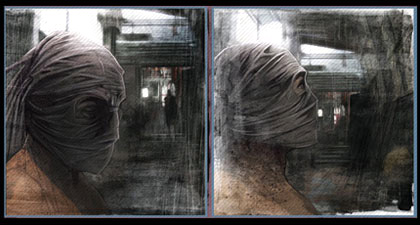 A lot of the work you do is concept work. Do you get frustrated when a lot of your work doesn’t get past the concept stage?

It does get a bit frustrating, especially for the team. But that’s the difference in production art to normal illustration. Concept art is part of the process and not the final product.

Are you able to tell us about any of the projects you’re working on at the moment?

Probably not, but I can tell you that we are working with SEGA again. This is cool as I get some cool freebies (I’m easily bought).

If people wanted to see examples of some of the work you’ve done for Bizarre, which would be the best game titles to look at?

It’s hard to say as it’s always a huge team effort. A lot of the game’s I have worked on have strived towards photorealism. So there’s not much room for personal expression. But I did spend a long time on Project Gotham Racing 2’s showroom. Rather then just trying to capture reality, hopefully games will head towards stylized graphics. This is where I would like to fit in. 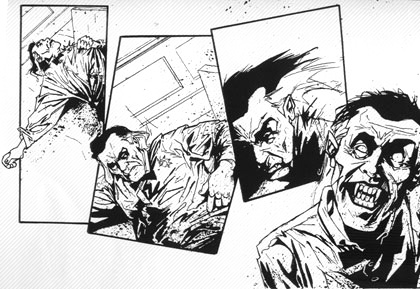 You have a very bold and unique illustration style which looks like it involves a lot of time and effort. What’s the process you go through to create your images?

Cheers thunder chunky :) I tend to start out traditionally, pencil, grey markers and my old toothbrush. Then I scan it and overlay textures and then print it out really dark and work into it with white pencil’s etc. Then scan it back in and work into some more in a paint package. It’s a process where I can still get out my paint brushes with out being tied to my PC.

Would you say your work drew a lot of inspiration from anywhere or was it just a style you developed over the years?

To be honest, 2000ad has played a big influence. Having read it every week since I was 7. It’s had such a great mix of artist’s over the years. Other artist’s from Bill Sienkiewicz to Brian Bolland have all influenced me in someway. Just by the cool image’s they create. Also working in game development has increased my interest in lighting and mood.

Are there any lessons you’ve learned from your time in the industry which you’d like to pass on to aspiring artists?

I’m still learning myself, so you have to be prepared to keep learning. 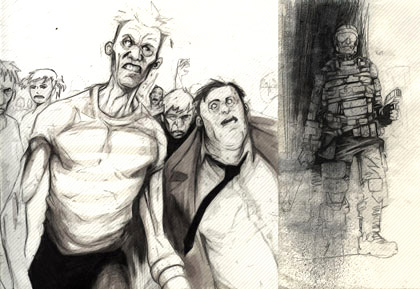 Hopefully I can get my own website off the ground, finish all my commissions and complete Half-life 2 :). Top of the list this month is my son’s 2nd birthday, so present’s and a trip to the Zoo ( avoiding any migrating bird’s) And maybe a trip to Brighton, for the new Comic expo that’s going on in November. Mam-tor’s “Event Horizon 2” will be launched there. Liam Sharp and most of the contributor’s will be signing.

Finally, what’s the one thing everybody should do today?

You can find Lee’s contributions to Event Horizon 2 on the Mam Tor site and you can check out the work Bizarre do at www.bizarreonline.net

Liverpool-based digital designer. Still the reigning table-tennis champ, since we no longer have a table-tennis table!