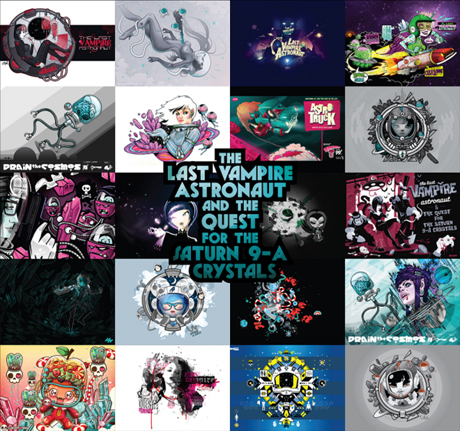 After recent discoveries of intergalactic communications, Thunder Chunky scientists have discovered a survivor from an ancient race of Vampire Astronauts. Compiling our vast amounts of illustration resources, we’ve been able to locate Jared Nickerson whose been collecting artists depictions of this rare undead space creature.

“…I approached a number of artists awhile back to each create a piece based on my Last Vampire Astronaut character. I tried to mix up the style of artists but also select artists I respected. The only stipulation I had was to keep some of the same thematic elements such as the crystals, brains, astronauts, and of course vampires. Besides that, I left it up to the artist to interpret the original design in anyway they wished…” – J3Concepts