The Middle Boop empire has begun

In less than 2 years, Gordon ‘Middle Boop’ Reid has already established himself strongly in the design and illustration scene. From graduating in 2009, during a less than ideal economic environment, to working on projects for international clients such as ESPN, Maxim and running his own popular Music / Design magazine. We catch up with the young gun super star for an insightful interview. (A must read for design graduates wanting to forge a successful career). The Middle Boop empire has begun.

In less than 2 years, Gordon ‘Middle Boop’ Reid has already established himself strongly in the design and illustration scene. From graduating in 2009, during a less than ideal economic environment, to working on projects for international clients such as ESPN, Maxim and running his own popular Music / Design magazine. We catch up with the young gun super star for an insightful interview. (A must read for design graduates wanting to forge a successful career). The Middle Boop empire has begun.

Hey Gordon, welcome to Thunder Chunky, how are you today?

Hey, I’m great thanks. Pretty excited as at the time on writing this, will have just re-launched my brand spanking new, all singing, all dancing design website with heaps of new work, so hopefully you guys will enjoy checking it out.

It is our pleasure to have you here… Can you tell us a little about yourself, and the Middle Boop brand?

It’s my pleasure to be talking to you too! Ok, so I started out in 2009 after graduating from uni and as the recession hit! I’ve been freelance design and illustrating ever since. It started as a way of expressing myself creatively as there were literally no design jobs but thanks to a lot of hard work, things started going in the right direction pretty quickly and I realised I could make a go of it. At first, I did a lot of work in the music industry, managing to work for some of my favourite bands such as Deerhunter and 65daysofstatic and have developed into working for an international client list including Maxim, ESPN and Computer Arts. I also run the Middle Boop Mag music site which has been going for about six months and employs just over twenty writers dedicated to promoting the most amazing new music from around the world as well as the best design and illustration. So there’s my design site Middle Boop and now the Middle Boop Mag site too. The next step will be opening my own gym, Middle Boop Active and my own airline, Middle Boop Atlantic ha!

So how has 2011 been treating you so far? Any exciting projects you want to tell us a little about?

2011 has had a lot of crazy ups and downs. Ups involve touring the country and over to Berlin with the Inkygoodness girls and their Totem project. Berlin was the highlight, they were exhibiting their totems as part of Pictoplasma, which, is one of the best events I’ve ever been to, amazing city, fantastic and meant I got to put a lot of faces to names with people I’ve worked with in some way or another over the last two years. I’ve also been working for some really cool clients, for instance, I’ve just had a massive illustration spanning across six pages in .Net magazine and contributed artwork for the Birmingham Royal Ballet. At the moment I’m really excited about a project I’m working on with my friends who run a film production company. They’re currently producing a film called Woodfalls and I’m doing all of the promo work including film posters and DVD covers etc. I’ve always wanted to have designed a DVD case that people can walk into HMV and buy so that’s one for the ticklist. It’s an ambitious project on their side of things but once it all comes together it should be really cool. Check out their pledge here. Apart from that, I’ve put a lot of time into re-launching my design site recently. I had been using indexhibit for a couple of years and although that had tied me over, I felt it was pretty restrictive and didn’t exactly showcase my work the way I wanted it to so I worked with a great designer in order to get my new site looking the best it can be.

Would you say you’ve developed quite a lot since you started in 2009? And which project do you feel really kick-started your career?

I would like to think I’ve developed a lot since starting out. I’ve certainly learned a lot in that time anyway! Stylistically I think I’ve incorporated a lot more detail into my work and I experiment a lot more with 3-d vectors, landscapes and colourful geometric shapes whereas in 2009 my work was a lot more flat and classical collage orientated. I think if you look at my work over the last couple of years you can see a nice evolution. The first time I was commissioned by Computer Arts to do a tutorial definitely helped kick-start the career as it was my first ‘dream client’ and really helped in getting my work out to a huge audience. Also my Digital Arts cover last year really put me on the map a lot more. It was an amazing project to be a part of and really aided in catching the eye of a lot of clients who I’ve worked with since then.

Your work involves a beautiful mixture of photography / illustration / graphic collages, please talk us through your process. How do you approach a brief?

Why thank you very much sir! Well it really depends on the brief, as every brief is so different (As you well know) but the general process goes something like, a lot of researching the target market, client, etc, then a bit of mind mapping (can you still say that?) sketching and development before finally taking things onto the computer. I normally find the artwork develops a lot over the time I work on the piece on screen.

Who / What would you say inspires you most?

Anyone that’s willing to go that extra mile to do what they want to do. I’m currently reading tellmewhy, which is a retrospective of Karlssonwilker’s first 24 months a design company, it’s really inspiring as it’s very honest in delving into some of the realities of design. I’m inspired by so many things really. I mean, although I spent a little time trying to get away from the retro tagline on my work, I have to say I can’t help but be drawn to a lot of retro 50’s and 60’s advertising.

What would be your dream project / client?

Well I’ve got a list of dream clients which basically feature a lot of the people that invest a lot of time and money into proper creativity and come up with some of the best products/campaigns. I suppose, Coca Cola are on top of the list, they always have great artwork and I drink a lot of coke, so to work with them at some point would be amazing. I would also still love to create an album cover for an amazing band, one of those ones that has a 16 page fold out sleeve and things. Apart from that, any project that’s fun to work on with a good art director and pays the rent is second to none.

Are there any people you would particularly like to work with from the Past and the Present?

Past, I would love to sit down and work with someone like Paul Rand or Lester Beal, in the height of their post world war two designs. Also it would’ve been great to be working in Manchester around the early 80’s, having something to do with Saville and Factory would have been amazing. Present, that’s a tough one actually. I’m always open to suggestions, I suppose anyone I can work well with and learn from that creates amazing artwork.

What’s the best piece of advice you’ve ever received? And what advice would ‘you’ give to young designers who want to walk the same path as yourself?

“you can achieve anything you want, as long as you put your mind to it.”

Well, I would say to young designers, just try to be different, friendly and not afraid to promote your own work. Work hard, develop a style and if you want it, good things will come. It all depends on how much work you put in. I would also advise to learn about the business side of things. Freelance design isn’t all about making artwork, a lot of it is the admin and negotiating skills are vital. You have to make sure you get the best fee possible from your clients. Too many young designers are allowing clients to offer minimal fees for a lot of work. I learned this the hard way, but a good grasp of business is second to none.

Can you tell us a bit about ‘The Publishers Club’? How did you guys come together? And future plans / events?

Well the Publishers Club first came together with Bec of Blanket Magazine, Dave of Ammo and Jules of New Sugar who wanted to organize regular designer meet ups. I came in after the first London meet up as I’d been talking to Jules about collaborating on something since we were both featured in an article in computer arts back in 2009 and this seemed like the perfect project to work together on. Since starting we’ve had a few more meet ups around the country and organized a big event in Manchester a few months ago. For the event we worked with Inkygoodness at a venue called Cord Bar, they had half of the space devoted to live drawing for their totems and we had the other half devoted to live screenprinting onto tees, prints and totes as well as selling our first Pub Club zine. It was a fantastic event and went down really well.

We’ve had a little break this summer as Jules has had a baby, Dave has been busy with various Ammo events, I’ve been up to my neck sorting out my new site and Bec’s just launched the first printed Blanket. But I’m sure we’ll be cooking up another event in the next few months. We’ve also been booked in to put something on for a very big and exciting event in 2012 but I can’t say any more than that at the moment.

If your life was a movie, what would be the perfect soundtrack to describe your journey so far?

Funnily enough, I was thinking about something similar to this the other day. Although it’s not strictly a movie, I would have to say the Curb Your Enthusiasm soundtrack would be pretty suitable for my life haha! I’ve had far too many ‘curb’ moments recently. 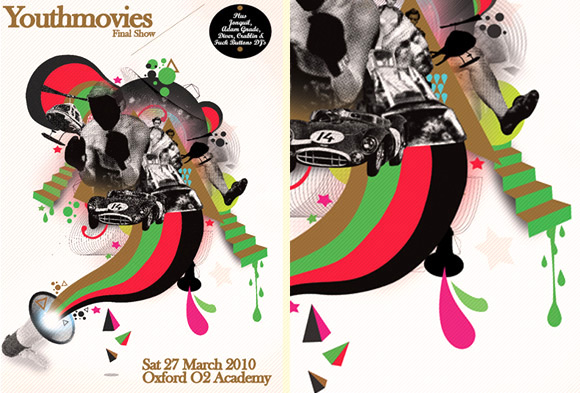 Finally, what’s the one thing that everybody should do today?

Look at my new website and then go and watch drive. It’s a brilliant film.

So, just to recap – check out more of Gordon’s work on his website and music lovers make sure to root around Middle Boop Mag, you might discover unknown musical gems. You can also get to know Gordon even better by following him on Twitter.

TweetShare on FacebookPin It